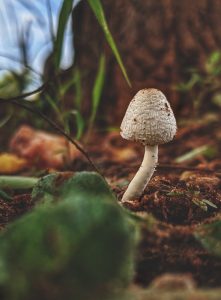 We at AIMS enjoyed this British Medical Journal blog piece very much, finding it to be an important integrative bridge perspective.

One of my adult sons asked me if I wanted to try magic mushrooms for my 50th birthday. After I spat out my tea I suggested he just take me out for a nice lunch. I am paraphrasing, but the pitch went something like this: “if a drug could reconnect you with a sense of awe, empathy, childlike-openness, and connectivity, would you take it?” My cheeky progeny went on to tell me it “can increase creativity, silence the ego, and allow you to better give and receive love.” I haven’t yet “tuned in or turned on”, but my quest to know more has been quite the trip.

There is clearly a psychedelic renaissance underway. These agents are now debated at medical conferences smirk-free, and my investment-obsessed friends predict a financial “‘shroom-boom”. During  2020 US election—yes that election—Measure 109 asked voters in Oregon whether magic mushrooms should be allowed for medical purposes, and Initiative 81 asked Washingtonians about decriminalising psychedelic plants and fungi.

[2] I have also been asked by several patients, at end-of-life, to prescribe a gram of mushrooms or a tablet of lysergic acid diethylamine (which my pharmacy cannot furnish), rather than a “bucket of fentanyl” (which the pharmacy readily can). In short, what was “counter-culture” might just become mainstream medical culture.

For the curious many, there is no better one-stop-shop than Michael Pollan’s “How to Change Your Mind: What the new science of psychedelics teaches us about consciousness, dying, addiction, depression, and transcendence.”

[3] Rightly, Pollan has been named one of the world’s top 100 most influential people by Time Magazine. He’s a convert, so expect others to board his modern-day psychedelic bus.

[4] Pollan also used part of his book advance to ingest lysergic acid diethylamide (aka LSD), psilocybin/psilocin (aka magic mushrooms), and dimethyltryptamine (aka ayahuasca, aka 5-MeO-DMT, aka “the toad”)—under medical supervision, I hasten to add.

Pollan writes scientifically, candidly, and persuasively. Alongside engaged personal stories, such as the Swiss chemist Albert Hoffman (who inadvertently experienced the first acid trip on his bike ride home), Al Hubbard (the “Johnny Appleseed of LSD”), and Timothy Leary, (whom Richard Nixon called the “most dangerous man in America’), Pollan explains the immense impact and potential of psychedelics. We are not just talking about spirituality, or limited to the sixties. For example, the environmental movement might be very different without the psychedelically-plausible Gaia Paradigm (which helped us feel more interconnected and interdependent). Similarly, there might be no Silicon Valley without the leaps and connections enabled by “microdosing” (namely, the practice of spurring creativity by consuming sub-hallucinogenic doses of a psychedelics).

[5]Despite a quarter-century of “brain doctoring”, and prior to reading Pollan, I knew the square root of nothing about the Default Mode Network (DMN).

[6]This refers to interconnected brain regions that help us believe we are a distinct self, separate from others and the natural world. This drives self-reliance, but can make us feel isolated. Moreover, as it “matures,” we respond in more habitual, predictable, rigid ways, i.e. we have a “default mode.” The theory is that DMN overactivity leads to excessive introspection, hypercriticism, obsession, depression, and anxiety. Psychedelics might decrease the tyranny of the DMN, thereby allowing unfamiliar parts of the brain to go on a play-date.

I’ve been well educated (in the conventional sense at least) but I spent my first half-century ignorant about the postal codes for consciousness, attention, memory, synesthesia, and rumination. These are still not fully mapped, but, there are plausible reasons why psychedelics could reach the parts that others cannot. In so doing, psychedelics could help those facing death (which is, after all, all of us at some point), or those addicted, or depressed, or experiencing Post Traumatic Stress Disorder. Pollan eschews words like panacea, but describes how these powerful “ego-lytic” drugs offer cognitive reboots: especially where conventional therapies have failed. Moreover, these experiences appear to help long after the drug has split the scene. Excuse a Canadian example, but if you’re stuck in an icy rut then psychedelics might offer fresh snow so you can make fresh tracks.

Whether or not society legalizes psychedelics, I have found the emerging science exciting and comforting. I am reassured that my brain is plastic enough that even this half-centurian could change. I like the idea that something, anything, could silence my despotic ego, and help me belong to a greater whole. I welcome psychedelic research and debate because we need ways for dying patients and addicts to feel part of nature, and therefore less scared to return to it. I want all of us to rewrite our dysfunctional stories (“it’s all my fault; it’s all their fault”) and to see life as a playground, not just a prison. I want us all to see connections and awe rather than isolation and despair. Obviously, we need to be cautious with any powerful pill, but a careful, supervised, shake of the cognitive snow globe might help. This biomedical doctor is not scared of a touch of mysticism, especially if it combats fundamentalism.

Some will argue that we should not medicate every human experience. Others will opine that if we legalize psychedelics that medics should not control access to the divine. In other words, hands-off doctor and stay-away big pharma. Fair enough. After all, we have a history of replacing one “wonder drug” with another (remember that heroin was synthesized by Bayer to cure morphine addiction). Research so far suggests that psychedelics appear minimally addictive, and not prone to overdose—but we’ve heard that before too. Regardless, the father of Alcoholics Anonymous, Willian Griffith Wilson, argued persuasively for psychedelics: believing they could combat cynicism, spur spiritual reawakening, and help people climb those stubborn 12 steps. A lot of us could benefit from accepting a higher power than the almighty “me.”

We should not throw out the scientific method, but psychedelics could increase the colours in our crayon set. To truly explore these agents we will need to accept the need to address suffering, (i.e. the story) not just symptoms (i.e. pain). Moreover, traditional research usually rejects studies that cannot be fully blinded, but psychedelics mean embracing the power of setting and expectation. This work will be challenging, but potentially “mind-expanding”. Even if like this half-centurian, your default is to be a scientific skeptic, let’s accept and celebrate the chance to change our minds.