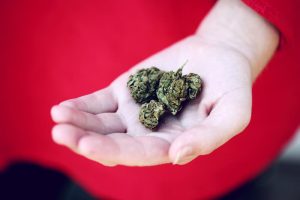 The integrated bioscientific study of how cannabis use affects human physiology and health has led to the discovery over the past few decades of a major molecular signaling system, widespread in the human body and present for 600 million years in living organisms. The system, known as the endocannabinoid signaling system, plays a critical homeostatic role in normal physiologic function, regulating mood, appetite, memory, inflammation, pain perception, movement, immunity, neuroprotection, bone formation, tumor suppression, and other functions. Disorders and deficiencies in endocannabinoids and related components are thought to contribute to disease, and naturally occurring cannabis compounds (cannabinoids) have been shown to target this system. THC, CBD, and other Cannabinoids, the key molecules produced in the resin made by the female flowers of the plant, likely evolved as a protective response to increasing UV radiation from sunlight at higher elevations it was exposed to during the geological uplift that created the Himalayas mountain ranges 50 million years ago.

​The WHO has acknowledged the therapeutic effects of cannabinoids including antidepressant, appetite stimulant, anticonvulsant and anti-spasmodic, and identified cannabinoids as beneficial in the treatment of asthma, glaucoma, and nausea and vomiting related to illnesses such as cancer and AIDS. Cannabis, given in whole plant extract form, has been shown in randomized controlled clinical trials involving hundreds of patients to significantly reduce untreated pain in advanced cancer patients who were also maximally taking morphine-like pain medications. Many positive outcome randomized controlled trials have shown benefit of whole plant cannabis preparations in the treatment of chronic pain syndromes, such as those that occur due to damage and disruption of nerves. The adverse effects of cannabis use are quite low when compared to other medications. There has been no recorded case of overdose in its thousands of years of documented use.

Accessibility by WAH
Call Us Text Us